Join us for our 91st Season!

Subscribe and enjoy savings over single ticket purchases, discounts on our Performance Series Shows and receive a Subscriber Card which offers discounts to Hillgrove Tap and Salerno's in Western Springs. 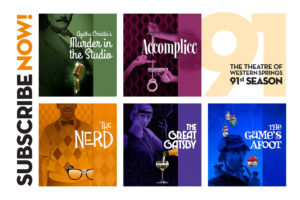 Become an Active to participate on and off our stages.

Three thrilling and chilling tales from the Mistress of Mystery herself. Ghosts, revenge, and a Hercule Poirot story presented as radio plays with amazing live sound effects.

A wife and her lover plan to murder her stuffy husband…and that's really all we can tell you! Except that you will gasp and guffaw at the twists and turns in this rollercoaster ride of a thriller.

Get ready to laugh yourself silly when a nice guy from Terra Haute hosts the houseguest from Hell.

In this gorgeous stage adaptation of Fitzgerald’s great American novel, Jay Gatsby's love for Daisy Buchanan explodes against the gilded backdrop of the Jazz Age.

In this side-splitting comedy, Broadway star William Gillette assumes the persona of his beloved Sherlock Holmes to track down the killer in his very own castle.

IN THE CATTELL THEATRE

Winner of the Pulitzer Prize for Drama, this memory play is the story of a survivor of pedophilia navigating the complexities of her relationships with her family.

A desperate mother hires a private investigator to find her runaway daughter in this harrowing, edge-of-your-seat thriller.