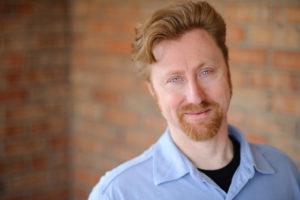 Andrew J. Pond moved to Chicago in 2002 from South Florida, where he had studied with the likes of Burt Reynolds, Dom DeLuise, José Quintero, and Charles Nelson Reilly. While there, he taught and directed at both InterAct Summer camp and the Miami Shores Theatre's summer camp. Since moving to Chicago from the tropics (for the weather), he has worked extensively as an actor, director, and playwright with several children’s theatres, is a founder of Eclectic Full Contact Theatre in Chicago, teaches drama classes for all ages, is an Elvis impersonator, juggler, magician, balloon artist, plays with puppets, does Muppet voices, performs stand-up comedy, and has a degree in philosophy so he can use words like “epistemology” at parties. Other than that, he is completely normal.