Lindsey Branson is thrilled to be at CTWS and finally find her “home”. Lindsey is the Children’s Director at TWS and holds a BA in Communications from Moody Bible and a MA from in Theatrical Directing from Roosevelt University. She is also a graduate of the Second City Improv Conservatory program and regularly performs with Improv Playhouse. Lindsey comes to CTWS after 3 years co-leading a large Children’s Ministry program at the Chapel and prior to that serving as Marketing Director for CYT/Spotlight Youth Theater, where she also directs and teaches. While Lindsey has been seen on stage in a number of local community theatrical productions, directing is her first love. She has directed over 40 productions all over Chicagoland including Tarzan, Beauty & the Beast, The Diary of Anne Frank, Leaving Iowa, Honk, A Midsummer Night’s Dream, Godspell, Mulan Jr, Les Misarables Jr, Shrek, The Importance of Being Earnest…. and many more. For five years, she served as an adjunct speech & theater teacher for Moody Bible Institute, directing their annual Christmas drama with over 8,000 people in attendance annually. As a teacher, Lindsey has taught dozens of classes for students ages 4-18, as well as special needs students, including musical theater, scene study, improv, character development, auditions & callbacks, basic drama, directing, theater basics and more.

Lindsey considers herself a true “theatre geek” through and through. She LOVES sharing her passion for theatre, creativity, and teamwork with the next generation. Lindsey feels that theatre is a “team sport” and that there is a place for everyone! She is a firm believer that theatre not only inspires but makes each person more empathetic, stronger, more compassionate and overall a better person. Lindsey loves coffee, the Muppets, telling stories, laughter, and trips to NYC. 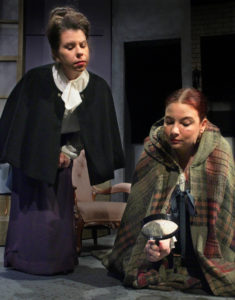