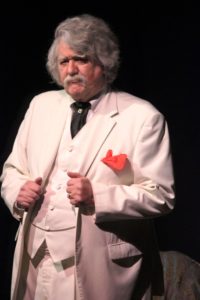 This one-man show features some of Twain’s most delightful stories, showcasing seasoned actor and musician Kurt H. Sutton. His interpretation of the stories told in the fashion of a bygone era sparks the hilarity and wit of Mark Twain and the period music of Samuel L. Clemens.

The most entertaining Mark Twain show touring the country today, Sutton, looking the part of an aging Twain in a white suit, invites the audience the opportunity to participate in the singing and music of the Clemens time period, with a variety of classic songs like “Bicycle Built for Two” and “Old Time Religion,” while enjoying Twain's hilarious tall tales and witty humor. An intriguing approach to this American literary icon and a wonderful evening of theatre!

"A living, breathing, American masterpiece, Mr. Sutton's classic performance is like no other and captures the hilarious humor of and irreverence of Mark Twain and adding the music of Sam Clemens just for fun!" "A natural successor to the great Hal Holbrook."